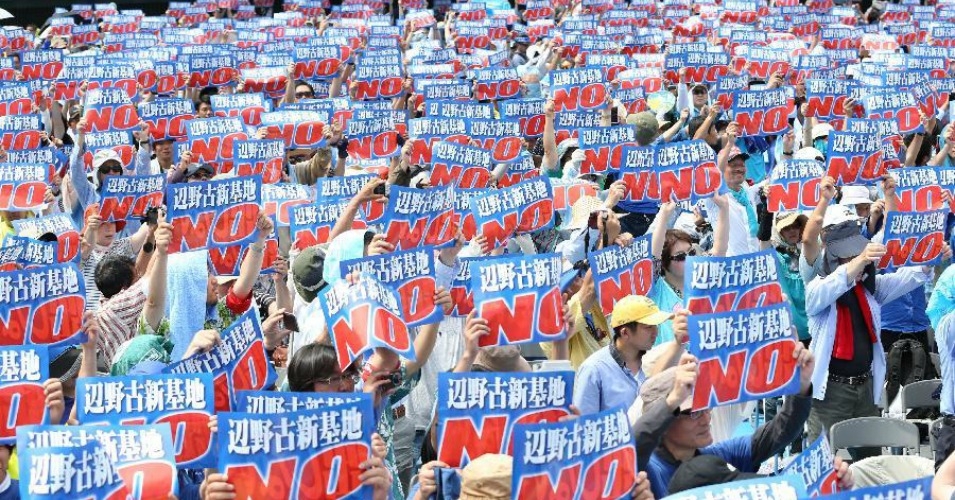 APRN Statement on Protests vs US Military Troops in Japan
June 24, 2016

The Asia Pacific Research Network (APRN) vehemently opposes the continued presence of US military troops in Okinawa Prefecture, Japan and condemns the Abe Administration’s continued negligence to the voices of the Okinawan people that led to the recent murder and rape of a 20-year-old Okinawan woman by a former US Marine.

Last May 19, Kenneth Franklin Shinzato was arrested by Okinawan authorities over the death of Rina Shumabukuro whose body was found beside a road in central Okinawa after being reported missing last April 28. The former US Marine confessed to raping Shimabukuro before strangling and stabbing her to death after which he transported her body in a suitcase. This is not the first time this happened in Okinawa – in 1995, three US Marines gang-raped a 12-year old Okinawan schoolgirl which marked the groundswell of peoples opposition against military bases in Japan[1]. Massive demonstrations in 1995 prompted the US to publicly ‘pledge’ in reducing its military footprint in Okinawa which ironically until now still serves as a linchpin to US’ security relations with Japan and a strategic location for the US to pursue its pivot to East Asia.

The recent killing and rape of a local Okinawan woman sparked yet again simultaneous mass protests across the country that gathered tens of thousands of people in Japan calling for the ouster of US military bases in the country.

The heavy US military presence in Okinawa operates under the US-Japan Security Treaty first signed in 1952 which allows the US to take unfettered military actions in Japan in the interest of ‘maintaining peace’ in East Asia. The security treaty was further amended in 1960 to include a separate pact called the SOFA (Status of Forces Agreement) agreement which unduly protects US military personnel, servicemen, base employees and certain civilian workers who commit crimes in the country by giving the US jurisdiction over such cases[2]. It must be noted that in this case of violence against Rina, the former US Marine was arrested by the Okinawan authorities, and is expected to face criminal court under the local authority. However, that may not have been possible had he fled into the US bases, or if the violence had occurred while on duty.

The continued US military presence this treaty perpetuates puts the Japanese peoples at risk as it allows free reign for US soldiers and service people to commit crimes with impunity, and provides the US with unrestricted access to Japan’s resources to secure its geopolitical interests in the region. For seven decades now since the end of World War II, the people continue to bear the weight of vast US military bases in Okinawa along with the numerous human rights violations associated with them.

In addition, Okinawa’s land mass is less than 1 percent of Japan’s but it is home to 74% of exclusive-use US military facilities in the country[3]. Okinawa currently hosts 26,000 US military personnel, 32 US military installations, 20 air spaces and 28 water areas that serve as training zones exclusive for US military use[4].

This over burden is, in part, due to the ignorance by the Japanese Government to let this go on. As an island on the peripheries of the Japanese Archipelago, the Okinawan people have historically been subject to discrimination by Tokyo. Nearly 80 percent of people in Okinawa have always demanded that the burden be at least matched by other prefecture’s share of US bases. However, the voices only fell into deaf ears of the ruling Liberal Democratic Party, especially under the current Abe Administration, who himself is aggressively leading the militarization of the Far East.

APRN stands in solidarity with the Okinawan people demanding justice for the death of Rina and the immediate pullout of US military troops from their land. We likewise urge our members, partners and the international community at large to continue opposing the presence of US military bases across the Asia Pacific region.

US TROOPS OUT NOW!