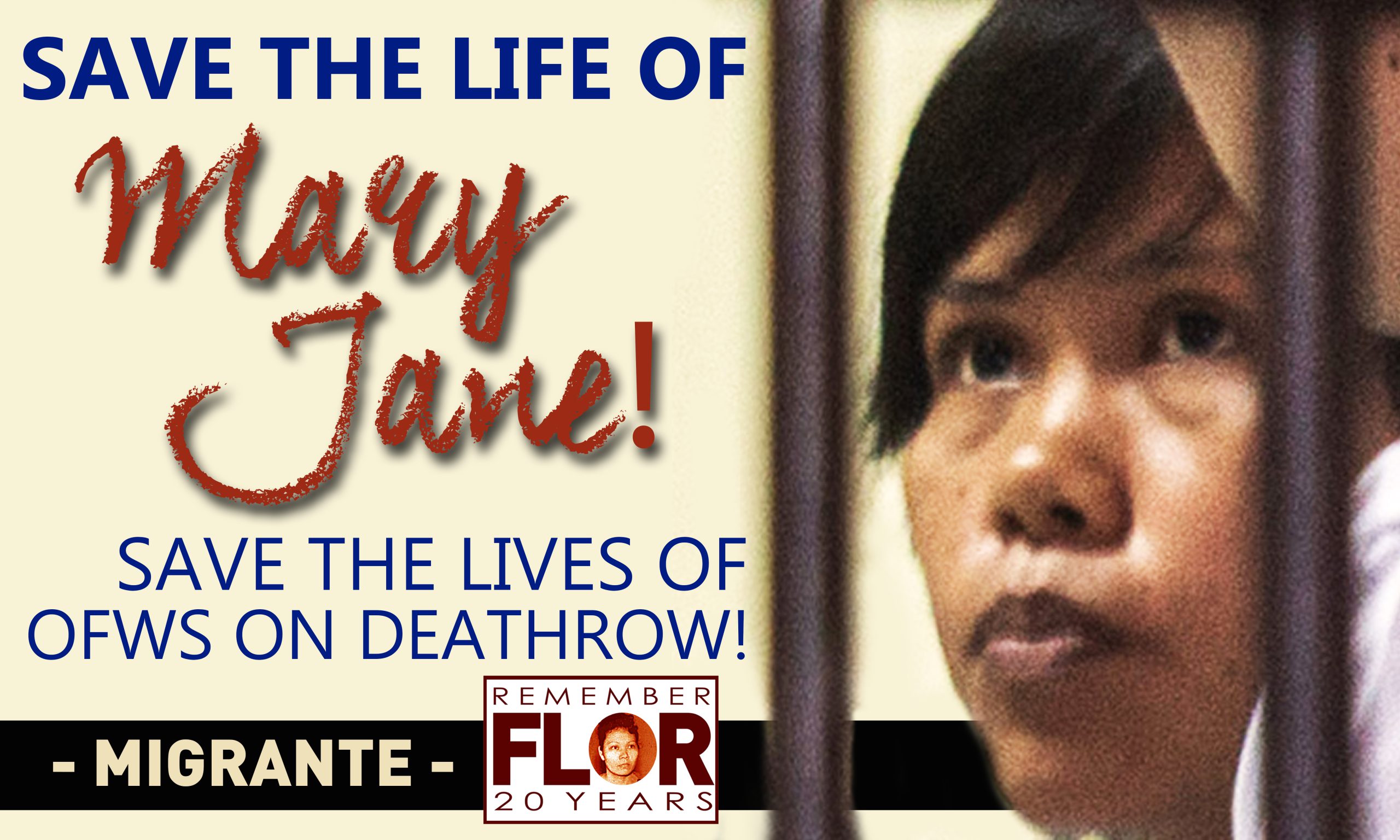 ‘Collective action can indeed move mountains, serve justice for the marginalized.’
As we celebrate the International Workers’ Day, the Asia Pacific Research Network join CSOs and people’s movements around the world in rejoicing over the Indonesian government’s decision to delay the execution of Mary Jane Veloso, a 30-year old migrant worker convicted of smuggling drugs to Indonesia. This is a leap towards delivering justice to her case. APRN lauds the untiring advocacy of the activists and peoples movements in the Philippines, Indonesia, Hong Kong and various other countries to save Mary Jane’s life. We are grateful and inspired by the outpour of international solidarity extended by people from all walks of life from all over the world, who did not give up even when it seems there was no more hope.

We are Mary Jane
Mary Jane Veloso is the daughter of sugarcane workers in Hacienda Luisita, a plantation in the Philippines owned by the President’s family. Having been raised in a poor, peasant family, Mary Jane married at the age of 17. To provide for her two sons, she was forced to work as a domestic helper in Dubai in 2009, where she stayed only for 10 months. She returned to the Philippines after her own employer attempted to rape her. After months of not being able to find employment in the Philippines, a family friend took Mary Jane with her to Malaysia under the promise of employment as a domestic worker, only to be told upon arrival that the job was not available. Mary Jane’s recruiter then sent her to a 7-day holiday to Indonesia. She discovered that she was tricked into bringing 2.6 kilograms of heroin when the Yogyakarta airport found the drugs sewn into the lining of her luggage that was bought for her. Mary Jane was convicted of drug smuggling in that same year and was sentenced death by firing squad.

Like others coming from poor families in developing countries, Mary Jane is a victim of the unjust development paradigm that breeds structural inequality and enriches a few at the expense of the larger portion of society. Like other women migrant workers, she is a victim of the neoliberal economic model that systematically disposes marginalized communities and families, turning them into cheap, disposable labor, and pushing them out of their own countries to find means of survival away from their loved ones. In Mary Jane’s case, her family’s landlessness and the lack of jobs in the Philippines forced her into migration. Like other Filipino migrant workers, she is a victim of the country’s labor export policy, which systematically disposes people to work as domestic helpers, or skilled laborers, whose billions of remittances keep the Philippine economy afloat.

Integration for Whom?
What does the future hold for migrant workers like Mary Jane in an integrated ASEAN? The ASEAN Economic Community blueprint for integration is a recipe for heightened trade liberalization and increase of corporate power, which can destroy local economies and people’s sovereignty over their country’s resources. With the proposed free flow of goods, labor, capital and investments, corporations can easily replace local labor with cheap foreign goods and/or move their operations to other countries with lower wages, weaker labor laws and less strict environmental regulations. This can depress wages, cause job losses and fuel forced migration among workers especially in developing ASEAN countries. Low-skilled migrant workers can face discrimination and abuse in a country where there is a growing need for skilled workers.

In the bid to attract more TNC investments, ASEAN member states are giving corporations stronger protection such as stronger intellectual property rights, investment defense forces, and the investor-state dispute settlement, which gives corporations the right to sue governments if their profits are in danger because of certain legislation even if they uphold people’s rights and welfare. This can spell grave consequences for labor rights and the people’s welfare in general. For example, French company Veola sued Egypt for increasing the country’s minimum wage.

The Fight Continues
The global push to save Mary Jane earned her a temporary lease on life. The new challenge for CSOs and peoples movements is to ultimately acquit Veloso and serve justice not only for her but also for other victims of human trafficking and illegal recruitment. The bigger challenge is to push for Development Justice to do away with the current model of economic development and integration which do not respect the people’s sovereignty and human rights.  Development Justice is a transformative framework for development that aims to reduce inequalities of wealth, power, and resources between countries, between rich and poor, and between men and women.

The International Workers’ Day reminds us that the indeed, collective struggle can bring positive, tangible change for the people and that the victories that were gained for workers all over the world need to protected from the neoliberal onslaught.

Together with people’s movements and CSOs across Asia and the Pacific, APRN calls to:

–        Respect human rights and protect migrant workers and their families