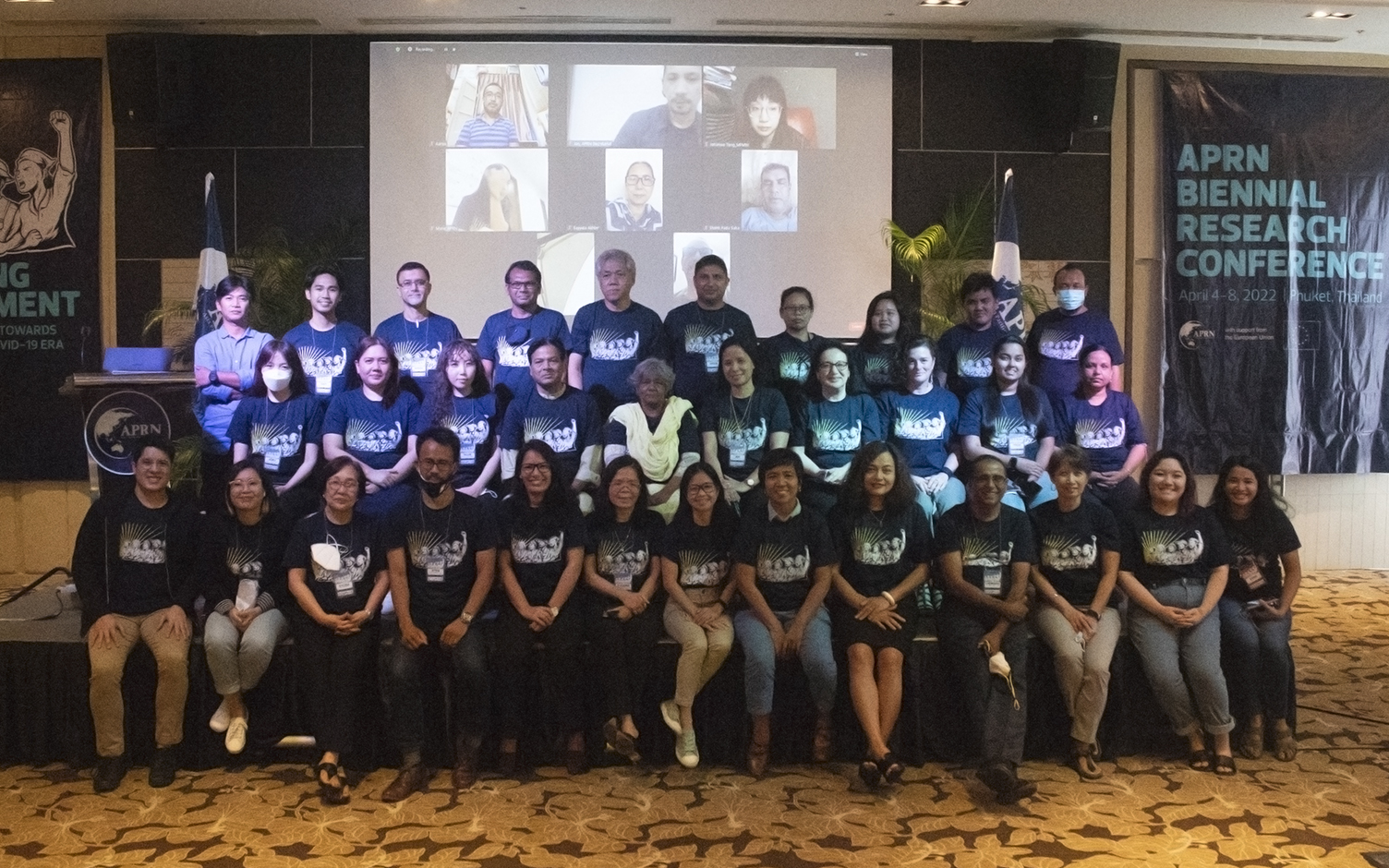 The Biennial Research Conference of the Asia-Pacific Research Network (APRN) was held from 04 to 07 April 2022. In light of the COVID-19 pandemic, the activity was hybrid, with most of the participants in Phuket, Thailand, and others participating online through video conferencing platform Zoom.

The research conference was held from 04 to 07 April 2022 while 08 April was devoted to the APRN General Council meeting. Sustainable Development Foundation Thailand and Action Filthai served as local co-organizers.

After Ms. Enano’s opening remarks, Mr. Antonio Tujan, Jr., chairperson and founder of the International People’s Research Network, delivered the keynote speech. After presenting international landmarks in development discourse, the multiple crises besetting the world, and the importance of Asia in this context, he discussed the struggle between pro-people and corporate frameworks of development. He asserted the necessity of system change and elaborated on the important role of people’s researchers. He said people’s researchers should support mass movements in creating autonomous change at the community level and in developing empowered individuals and families in a comprehensive and holistic manner.

Ms. Sayeed, in her keynote speech, sought to answer the question “Who Defines Development?” According to her, in contrast to imperialist and elite uses of development discourse, it is the progressive forces in society, mainly the working classes, who bring about genuine development in their struggle against exploitation and oppression. In the process, they have defined development — the farmers brought about food sovereignty, the workers opposed transnational corporations, and women challenged patriarchy. Ms. Sayeed called for overcoming the system of oppression and violence that is capitalism. She called for unity among the working classes and progressives, in fighting imperialism.

The keynote speeches were followed by a lively open forum, in which participants asked burning questions regarding: from what is the pro-people approach to small business owners to digitalization; and from educating the people to the role of people’s researchers.

Thailand-based cultural group Himigrante made two cultural performances — the English song “One Day” and the Filipino song “Babaylan.” A solidarity dinner was held at the venue’s grounds in the evening in which participants recited poems, sang songs, and gave solidarity messages.

Ms. Anne Ednalyn Dela Cruz, information and communications officer of the Asia Pacific Forum on Women, Law and Development (APWLD), presented a short analysis of how global elites are working to advance their interests amidst the global economic crises and the COVID-19 pandemic, with special attention to their use of Free Trade Agreements (FTAs), multilateral financial institutions and TNCs.

(1) “UK-India FTA: Impact on Peoples’ Economy in India,” by Mr. Afsar Jafri, Asia regional staff of GRAIN. The research aims to gather the feedback of Indian communities set to be affected by the UK-India FTA, in the process of crafting a campaign on the issues.

(2) “Structural challenges and barriers for gender equality in Kyrgyzstan in the context of neoliberal economy and COVID-19 crisis,” by Ms. Olga Djanaeva, director of the Rural Association of Women’s Organization (ALGA). The study seeks to uncover and analyze grassroots perspectives on existing conditions in Kyrgyzstan, their root causes, and the impacts of these on women’s rights and gender equality.

(3) “Mapping ASEAN Digital Agenda,” by Mr. Olisias Gultom, researcher of Indonesia for Global Justice. The research will present the ASEAN’s digital agenda, which was crafted alongside ASEAN’s participation in FTAs and in the context of the digital dominance of the US, China, and Europe. It will also look into ASEAN’s space for protecting people’s rights in the digital area and a possible ASEAN people’s digital agenda.

“Implications of RCEP on the Food Security of Selected ASEAN Countries,” by Ms. Gail Orduña, program assistant for the food sovereignty program of the Pesticide Action Network-Asia Pacific or PAN-AP. The paper will examine the impacts on the food security of Cambodia, Indonesia, Malaysia, and the Philippines including their food and agriculture liberalization commitments to the RCEP.

After the lunch break, Mr. Iggy Sandrino of the Ecumenical Institute for Labor Education and Research or Eiler spoke about genuine recovery and economic justice. He tackled the dominance of neoliberal economic policies in the world, its impact on workers in the Asia-Pacific region, cross-border FTAs and how they serve the global elite’s neoliberal agenda, and their impacts on agriculture. He concluded by saying that genuine development and recovery are possible only through the action of the most adversely affected, the working classes and people.

Day 3: The path towards a just and lasting peace

(1) “Study on Conflict Dynamics, Development Cooperation and Implications on Peace and Security in India’s North East,” by Mr. Jiten Yumnam, Center for Research and Advocacy in Manipur. The study shall present the geopolitical and socio-economic context of the conflicts in North East India, the impacts of these contexts on the peace and security of indigenous peoples and women, and pro-people recommendations.

(2) “Beyond the Military and Energy Security Narrative: Towards Peace in the Asia-Pacific Region Based on Justice and People’s Rights,” by Ms. Natalie Lowrey, campaign coordinator of AID/Watch. The research will look into Australia’s foreign policy and regional security mechanisms that support a militarized Asia-Pacific, and their effects on ecological damage, land grabbing, development aggression, climate change, and human rights.

(3) “Imperialists’ Agenda in South Asia: Fanning the Flames of Militarism and Fascism,” by Ms. Sayeed. The study seeks to deepen understanding of the imperialist role in the India-Pakistan conflict and the whole of South Asia,  imperialism’s use of fascist groups, and the motivations of the youth in these countries for joining such groups.

After the lunch break, a video was shown of Mr. Peter Murphy, global council chairperson of the International Coalition for Human Rights in the Philippines or ICHRP, expressing his solidarity with the APRN Biennial.

Ms. Lowrey then delivered a speech that set the tone for the workshop session. She presented six major military alliances in the Asia-Pacific region and their relation to global superpowers: the Quadrilateral Security Dialogue or QUAD, the Australia-UK-US trilateral security pact, or AUKUS, the Shanghai Cooperation Organization, as well as The Five Eyes, the Five Power Defense Arrangements, and the Lombok Treaty. Ms. Lowrey outlined ways that the struggle for a just and lasting peace in the region can be strengthened and briefly discussed case studies of resistance: the June 2021 Land Forces Expo in Brisbane, Australia, and global actions against Lockheed Martin.

The participants were then divided into four workshops groups, which were asked to discuss the following: the impacts of the Quad, AUKUS, and other such military and security alliances on the constituencies of the participants’ organizations, campaign and advocacy actions undertaken by these organizations in response to these issues, and possible research questions in the area.

After a two-hour discussion, representatives of the workshop groups were asked to report on their output. To show their solidarity against wars, militarism, and fascism, the workshop groups went to the stage carrying signs containing their demands on these issues written in various languages.

Day 4: Solidarity and action towards a better global order

Mr. Chennaiah Poguri of SAHANIVASA introduced the panel. Taking off from the previous day’s discussion about how current neoliberal development goals do not and will not bring about real change, he said that the day’s panel will revolve around the initiatives of and relations between NGOs and people’s organizations as they fight for a better future.

(1) “Food Security Challenges During COVID-19 in India —  Role of State and Community Response: Case Studies from Eastern India,” by Ms. Moitra. The research would delve into the gaps in the Indian government’s food and nutrition policy as seen through the efforts of both the Indian state and marginalized communities in response to the lack of food among the farmers, fishers, and migrant workers during the pandemic.

(2) “Identifying the Struggle of the Fisher Families of Teknaf Fighting the Impact of Rohingya Influx, Fishing Ban and COVID-19,” by Mr. Muhammad Mujibul Haque Munir of the Coastal Association for Social Transformation (COAST) Trust Foundation, who presented via Zoom. The paper will study the said challenges facing the Teknaf community, one of the first responders in the Rohingya crisis but has not received sufficient attention or support from governments, UN organizations, or any humanitarian organizations.

(3) “Isnag People’s Resistance to the Gened Dam Projects in Apayao, Cordillera Philippines,” by Ms. Charmagne Anne Rimando of the Center for Development Programs in the Cordilleras (CDPC). The research will look into the development objectives of four hydropower dams being pushed in the area, the Isnag people’s development issues, and their resistance initiatives.

(4) “Pandemic: Cybercrime Against Women,” by Ms. Kad. The research will look into the increasing trend of cybercrime against women, especially in their workplaces, in the aftermath of the COVID-19 pandemic, as well as pertinent cybercrime laws.

(5) “Designing Finance for Community-Based Climate Actions,” by Ms. Wanun Permpibul of Climate Watch-Thailand. The research aims to study women and farmer communities’ access or lack of access to climate financing for both mitigation and adaptation.

(6) “Mapping the Climate-induced Conflict, Fragility and Human Insecurity among the Communities in Bangladesh,” by Mr. Syed Jahangir Hasan Masum of the Coastal Development Partnership. The study will examine the relationships between climate change on the one hand and social peace, local conflicts, and human security on the other in selected communities in Bangladesh.

After the lunch break, Mr. Raymond Palatino of the Bagong Alyansang Makabayan (New Patriotic Alliance) or Bayan, gave a speech preparing the ground for the day’s workshops. He discussed the relations between Bayan, which leads the mass movement in the Philippines, and APRN, an NGO, saying that both are united by a common vision of defeating imperialism and building a new world. He said the COVID-19 pandemic should alert us not only to a health emergency but to the environmental crisis. Mr. Palatino said that the pandemic is not yet over but people continue to struggle for a new normal that is characterized by freedom of expression, human rights, equality, and inclusive democracy.

Four workshop groups then discussed the following: solutions advanced at the grassroots level; initiatives to mobilize public action at the country and regional levels; efforts of solidarity across sectors and borders; and the research, advocacy and campaign initiatives that can capture these solutions from the ground.

The General Council or GC meeting was then conducted on 08 April 2022. It discussed and agreed on organizational matters such as reports, membership, and plans. The GC also elected a new set of BOC composed of Ms. Azra Sayeed of Roots for Equity, Ms. Jennifer del-Rosario Malonzo of Ibon International, Mr. Ajay Jha of CECOEDECON, Ms. Natalie Lowrey of AID/Watch, Mr. Aaron Ceradoy of APMM, Ms. Mandkhaitsetsen Urantulkhuur of CHRD, and Ms. Olga Djanaeva of ALGA.

The newly-elected BOC members expressed their appreciation for the APRN Secretariat for their work and the participants for their active engagement in the whole event.

After the GC meeting, the newly-elected APRN BOC members

agreed on the roles within the board: Ms. Sayeed as BOC chairperson; Ms. Del Rosario-Malonzo as BOC vice-chairperson; Mr. Jha, Mr. Ceradoy, and Ms. Urantulkhuur as BOC regular members; and Ms. Lowrey and Ms. Djanaeva as BOC alternate members.

On the afternoon of April 8, APRN members attended a solidarity activity with the Thailand farmers group Southern Peasants Federation of Thailand (SPFT) which was co-organized by Action Fil Thai. Suraphon Songrak, secretary-general of SPFT, shared the struggles of peasants in Thailand and their lessons from the ground. Collective chanting and speeches of appreciation and solidarity concluded the 5-day gathering. ###