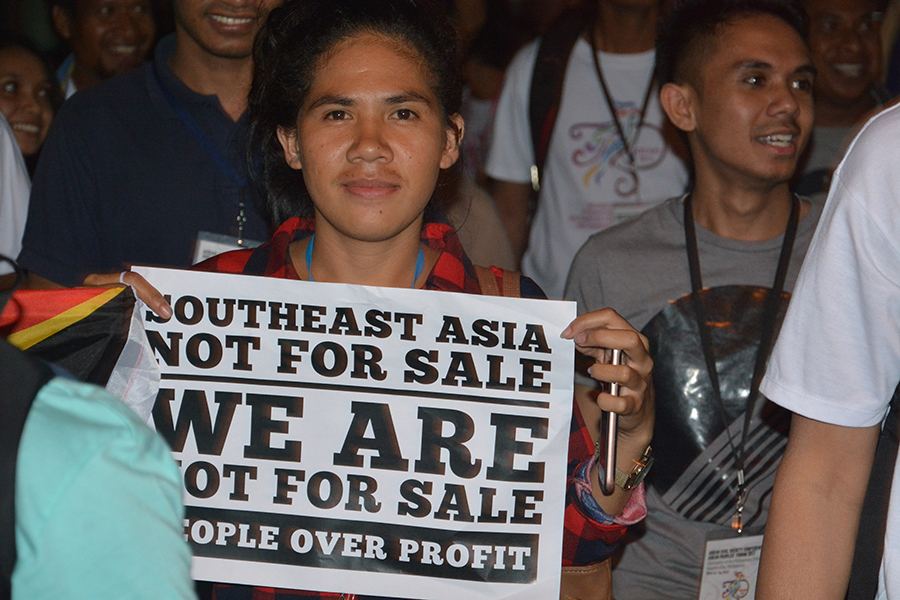 The call “Southeast Asia is not for sale. We are not for sale!” echoed as hundreds marched to the historic People Power Monument along the Epifanio Delos Santos Avenue in Manila, Philippines to conclude the 2017 ASEAN Civil Society Conference/ASEAN People’s Forum (ACSC/APF). The ACSC/APF is an annual gathering of Southeast Asian civil society organizations held parallel to the Association of Southeast Asian Nations’ (ASEAN) Summit.

For four days starting 10, November 2017, CSOs from the ten ASEAN countries gathered in Manila for the 2017 ACSC/APF. In this year’s ACSC/APF, organizations were brought together into Convergence Spaces where they could discuss and learn from each other’s expertise and experiences in tackling similar or interrelated people’s issues, and from there, formulate ways on how to develop and advance regional campaigns. The Convergence Spaces were on Corporate Greed and Power, Labor Mobility and Mixed Migration, Life with Dignity, Peace and Human Security, and Human Rights and Access to Justice.

The Asia Pacific Research Network (APRN) and Asia Pacific Forum for Women, Law, and Development (APWLD) took the lead in organizing the Convergence Space on Corporate Greed and Power. On the run-up to the main conference, three (3) webinar primers aimed at setting the tone and preparing the participants for a more thorough discussion were organized by the group. The first of the set unmasked how corporations facilitate and strengthen their grip on the economies of Southeast Asia through the economic integration plan outlined in the ASEAN Economic Community. The 2nd webinar focused on the manifestations of corporate power in the region and its impacts on people’s rights. The 3rd and last webinar discussed current practices in building an alternative integration model that focuses on people to people solidarity. Resource persons from Ibon International, Center for Environmental Concerns, and PAN Asia Pacific also contributed to the online discussions.

Solidarity for IP rights
Kalumbay Regional Lumad Organization, APRN, People Over Profit, and the Rural Missionaries of the Philippines-Northern Mindanao opened day 2 with a solidarity action for human rights in Mindanao, held in front of the Headquarters of the Philippine Commission on Human Rights, where a meeting of the ASEAN Intergovernmental Commission on Human Rights (AICHR) is set to happen during the day. La’o Hamutuk of Timor-Leste, women’s group Seruni of Indonesia, the Cambodian Youth Network and the Coalition of Cambodian Farmer Community, the Center for Environmental Concerns-Philippines, PAN Asia Pacific, APWLD, and KARAPATAN People’s Rights Alliance supported the protest which condemned the resource plunder, land grabbing of ancestral domains, and killings of indigenous peoples in the southernmost island of the Philippines.

Bai Jocelyn, a woman leader of the Lumad national minority, blamed multinational mining companies and agro-plantations as main culprits for the displacement and other rights violations committed against the Lumad communities. “The greed for profit of these big corporations is what drives us out of our lands. We are being killed, our houses burned, our schools used as barracks, our small farms seized, all of these so that foreign companies can set up their businesses in our lands, in our country,” said Bai Jocelyn, lamenting their plight.

Timorese Juvenal Dias echoed the same sentiment and called on everyone to stand up in defense of ancestral lands. “Our lands, from Timor-Leste to Mindanao, are not for the elites and private companies to plunder! Timor-Leste and Mindanao are for the people,” exclaimed Dias.

The environmental consequences of the entry of foreign mining corporations into the country were raised by April Porteria of Center for Environmental Concerns-Philippines. “The neoliberal Philippine Mining Law of 1995 has been used to legitimize the foreign-dominated, anti-people and plunderous orientation of the mining industry. Through this law 100% foreign-owned companies can extract valuable resources from our lands and repatriate their profits in full, while leaving behind host communities poorer than ever and reeling from the destructive impacts of the industry,” said Porteria.

Tinay Palabay of Karapatan condemned the inaction of AICHR on the cases of human rights violations in the region and called the body toothless. “In its 10 years, AICHR has been toothless in protecting and promoting the rights of the people of Southeast Asia, and in this time of worsening attacks we could only rely on our strong solidarity to defend our rights,” said Palabay.

The solidarity action also slammed the push to conclude the Trans-Pacific Partnership Agreement (TPPA) and the Regional Comprehensive Economic Partnerhsip Agreement (RCEP), which would worsen the plunder of resources of the less developed country partners, while enhancing the rights of multinational companies.

AEC: All-Out Economic Capture
The Convergence Space on Corporate Greed and Power opened with a discussion on the ASEAN Economic Community (AEC). Marjorie Pamintuan of APRN gave a brief background of the AEC, and how corporations ensure that their agenda steers the course of the region’s economic integration.

“ASEAN boasts of a growth rate of 5.3%, faster than those of the EU and the US, a story of success, which according to investors, could only continue if the region sticks to its regional integration plan, the AEC 2025,” said Pamintuan. “But the reality on the ground is different; one that is actually far from the promising forecast investors wants us to believe in. Credit Suisse Global Wealth Databook 2016 reveals that Thailand and Indonesia are the 3rd and 4th most unequal countries in the world, respectively. In Thailand, the richest 1% owns 58% of the total wealth of the country, while in Indonesia the richest 1% owns 49.3%. The same report shows worrying levels of inequality in all ASEAN countries,” she added.

“As a blueprint for fortifying the corporate stronghold in Southeast Asia, the AEC 2025 plans to embark in increasing protection for investors and corporations through intellectual property rights as well as enhanced dispute settlement, a safeguard for their capital and profits while they expand further the liberalization and deregulation of trade in the region. Both the RCEP and TPP follows this framework, with both having the highly contentious Investor-State Dispute Settlement, provisions to remove trade in services restrictions, liberalization of the service sector, further reduction of tariffs, amongst other provisions. AEC 2025, when concluded, would be nothing but an All-out Economic Capture of Southeast Asia,” Pamintuan said.

In contrast to this, Pamintuan prescribes a regional integration founded on people’s rights. She expounds on this saying, “the people in Southeast Asia are demanding for a regional integration that will promote development justice. A regional integration that places people’s rights and people’s sovereignty at the core of its policies and plans; engages full citizen participation in policy formulation, implementation, and monitoring and review at local, national, and regional levels; promotes solidarity, cooperation, and complementarity among states and peoples, advocates for a peaceful and friendly coexistence of nations; contributes to ecological sustainability; and provides a mechanism to ensure the accountability of both governments and the private sector.”

Subsequent discussions elaborated the manifestations of corporate power in the region.

“The majority of the population in ASEAN are farmers, and corporate power manifests itself in the most brutal ways on their lives,” said Danica Castillo of PAN Asia Pacific. “Land grabbing by plantations displaces their whole community. Those who try to defend their lands get murdered or criminalized. Agro-chemical monopolies lock our farm workers in a deadly cycle of GMO agriculture and use of highly hazardous pesticides. Their grip on the market of seeds and agricultural inputs gives farmers no other choice but to purchase the toxic products that are slowly killing them, their children, the environment, and the surrounding biodiversity. The corporations are poisoning them while reaping huge profits out of it,” Castillo added.

Lei Covero of IBON International called for corporate accountability on climate change. According to Covero, big multinational corporations are the main culprit in the climate crisis and the biggest obstacle in the efforts to promote sustainable use of the planet’s resources.

“For these TNCs the need for profit overshadows the grave necessity to reform the unsustainable practices of the market. But with their power, the corporate elite manage to disregard, and even go against, climate change mitigation efforts,”

Covero stressed the need to establish mechanisms “to rein in these destructive corporations.” “It is not only urgent for us, but for all the people of the world, it is about our lives and livelihoods. Nature can only take so much. Their impunity must end if we are to save this planet,” she concluded.

Diyana Yahaya of APLWD slammed the WTO for demolishing so-called barriers to free trade, which in turn destroys local industries in less developed countries. “So-called “protectionist policies” that developed countries used in the past for their own development have been done away with through policies promoted by the WTO.  With the rise of the new generation of free trade agreements, such as the revived TPP and the RCEP, corporations seeks to cement their power in the region, and disempower the people from crafting their own path to development,” said Yahaya.

The topic was further discussed in four workshops the following day which focused on the RCEP, led by APRN and APWLD, the struggle for Climate Justice, led by IBON International, Energy and Extractive Industries, led by Center for Environmental Concerns-Philippines, and Asia Indigenous Peoples Network on Extractive Industries and Energy, and on Agro-Chemical TNCs and Food Sovereignty, led by the Philippine Network of Food Security Programmes and PAN AP.

“RCEP: Robbing Communities to Extract Profit,” historicised the rise of RCEP and other free trade agreements and delved into how this neo-liberal trade agreement threatens people’s rights. The workshop on Extractives and Energy presented stories from indigenous peoples in Southeast Asia regarding the effects of energy and extractives industries to peoples and the environment. The climate justice workshop stressed that TNCs and developed countries responsibility for causing climate change. Meanwhile, the workshop on agro-chem TNCS and food sovereignty stressed the need to forward peasants’ rights and land reform while at the same time developing ecologically-sound agriculture and agro-ecology.

The workshops ended with draft points for action for people’s movements which were then approved and adopted during the Convergence Space’s plenary meeting.

We are not for sale!
The final day of the conference further galvanized the unity of the Convergence Space on Corporate Greed and Power to fight back, as the ACSC/APF plenary centres the discussions on the ways forward for people’s movements.

The Convergence Space agreed to work out a regional campaign that will expose and shame corporations through a people’s tribunal, and for a binding treaty that would hold transnational corporations and other business entities accountable. They also committed to continue their work beyond the conference and to bring in other organizations working on the same issues.

As the Corporate Space on Corporate Power reported, various organisations gathered to hold an on-stage action to stress how, in any regional-level process, peoples’ interests should be paramount over private profit, by asserting that “Southeast Asia is not for sale, [that] we are not for sale,” a call that became central to the mobilisation in the 2017 ACSC/APF. The quick action also called on peoples to resist U.S.-led militarism in the region.

ACSC/APF 2017 concluded as the Philippine National Organizing Committee hands over the leadership to the representatives of the Singapore CSOs who will spearhead next year’s conference.